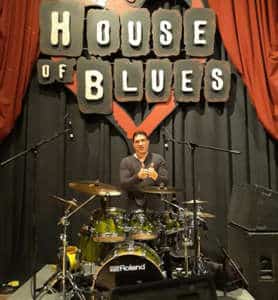 I have been teaching and playing drums professionally for over 20 years and learned from some of the most prominent instructors in the industry. These instructors include Dom Famularo, Jim Chapin, Joe Franco, Al Miller, and Frank Cassara. I was an instructor at one of the top drum schools in New York, The Long Island Drum Center, and obtained a BA in Music Education from Long Island University-CW Post Campus.

In 2007, I moved with my wife and two children to the Matthews-Charlotte area of North Carolina. Upon arriving in Charlotte, I started instructing and performing. I established a student base teaching drums/percussion to all ages and skill levels, including hand drum lessons (Conga/Djembe). From 2007-2012, I was a member of the NBA Charlotte Bobcats Drumline, The Rhythm Cats. In my years of playing professionally, I have performed in over 5000 shows including Off-Broadway, House of Blues, The Fillmore and many other venues. I’m currently the bandleader and drummer of the popular bands, KidsinAmericaband.com-Totally 80s Tribute Band, NewKidsband.com-The Super Fly 90s Tribute Band, and Chicago Rewired-The Premier Chicago Tribute Band.